Bonita Zimdars was our previous Village Clerk-Treasurer (2005-2012). She left the Village in April 2012 after being diagnosed with ALS. Bonita passed away on Friday, June 30th from her battle with ALS. Bonita was a great person and she did her job well. She took ownership and pride in her position seeing that the village work was completed in a professional and complete manner. Bonita has been missed and will continue to be missed but at least she is at peace now. May our thoughts and prayers be with her and her family. 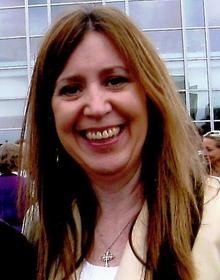 Bonita R. Zimdars, 57, of Watertown passed away on Friday, June 30, 2017 at her home with her loving family by her side after a 5 ½ year battle with ALS. Bonita was born on March 3rd, 1960 to Norman F. and Joyce E. (Raymer) Duffrin in Hillsboro, WI, and moved to Watertown in 1965. Bonita graduated from Watertown High School in 1978, and then graduated from U.W. Whitewater with a B. A. in Business Administration. On October 10th, 1981, she married the love of her life, Kurt Zimdars. Bonita had three daughters who were her pride and joy; Stephanie of Watertown, Samantha and Kirsten both of Madison. She worked for Morgan Stanley Dean Witter for 20 years and the Village of Chenequa until her illness required her to take early retirement. She served her church in many capacities… Sunday School teacher, lector, communion assistant and served as treasurer of the Women of the ELCA for 4 years. Bonita served as Secretary of the American Association of University Women, and as treasurer. She also was secretary for the Municipal Treasurers of Wisconsin, and District Director for the Municipal Treasurers of Wisconsin. Bonita felt strongly about the importance of being a blood donor. Her happiest times were spent with family at Brewer games and other sporting events, and she especially had a deep love of music and loved to attend concerts. Walking her dogs was a great joy for her. Bonita is survived by: her loving husband of 35 years, Kurt; her three daughters, Stephanie, Samantha, and Kirsten, sisters Diane (Mike) Turke, Jayne (Todd) Barta, and a brother Todd (Amy) Duffrin. Also her brother-in-law Dale (Jean) Zimdars, as well as nieces and nephews. She is preceded in death by: her parents Norman and Joyce Duffrin, her mother-in-law Diana Zimdars, and her father-in-law Gerhard Zimdars. The family would like to thank the staff of Rainbow Hospice for the loving care they provided for Bonita. Especially Alicia, Christa and Terri. Memorials in Bonita’s honor may be made to the Watertown Food Pantry. A funeral service will be held at 11:00 A.M. on Saturday, July 8th, 2017 at Immanuel Lutheran Church in Watertown with the Rev. Todd Iverson and Rev. Terry and Sue Larson presiding. A visitation will be held from 9:00 A.M. until the time of service at the church.

Couldn't find what you were looking for?

Try our Frequently Asked Questions page, or try a different search using the form below.